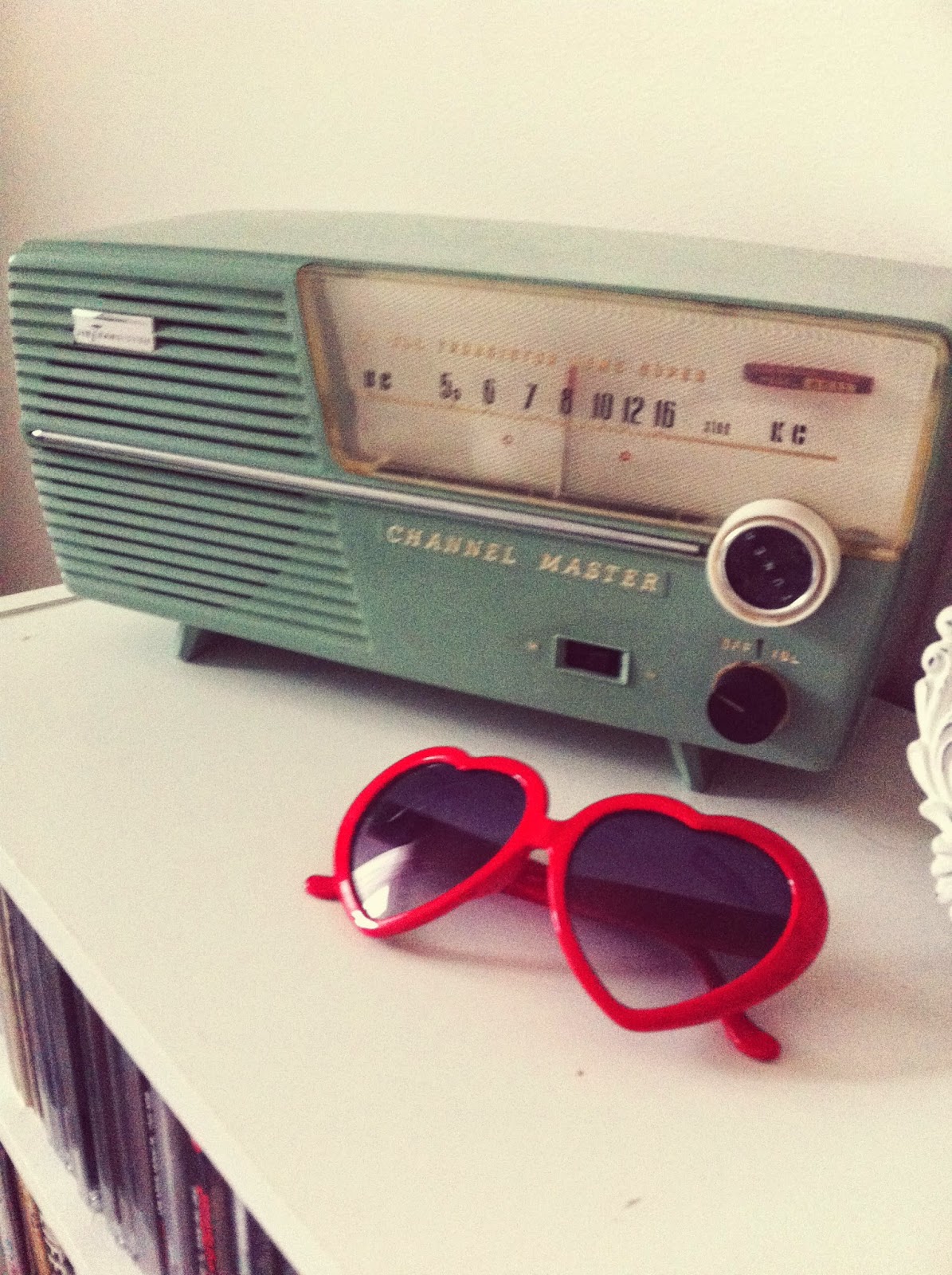 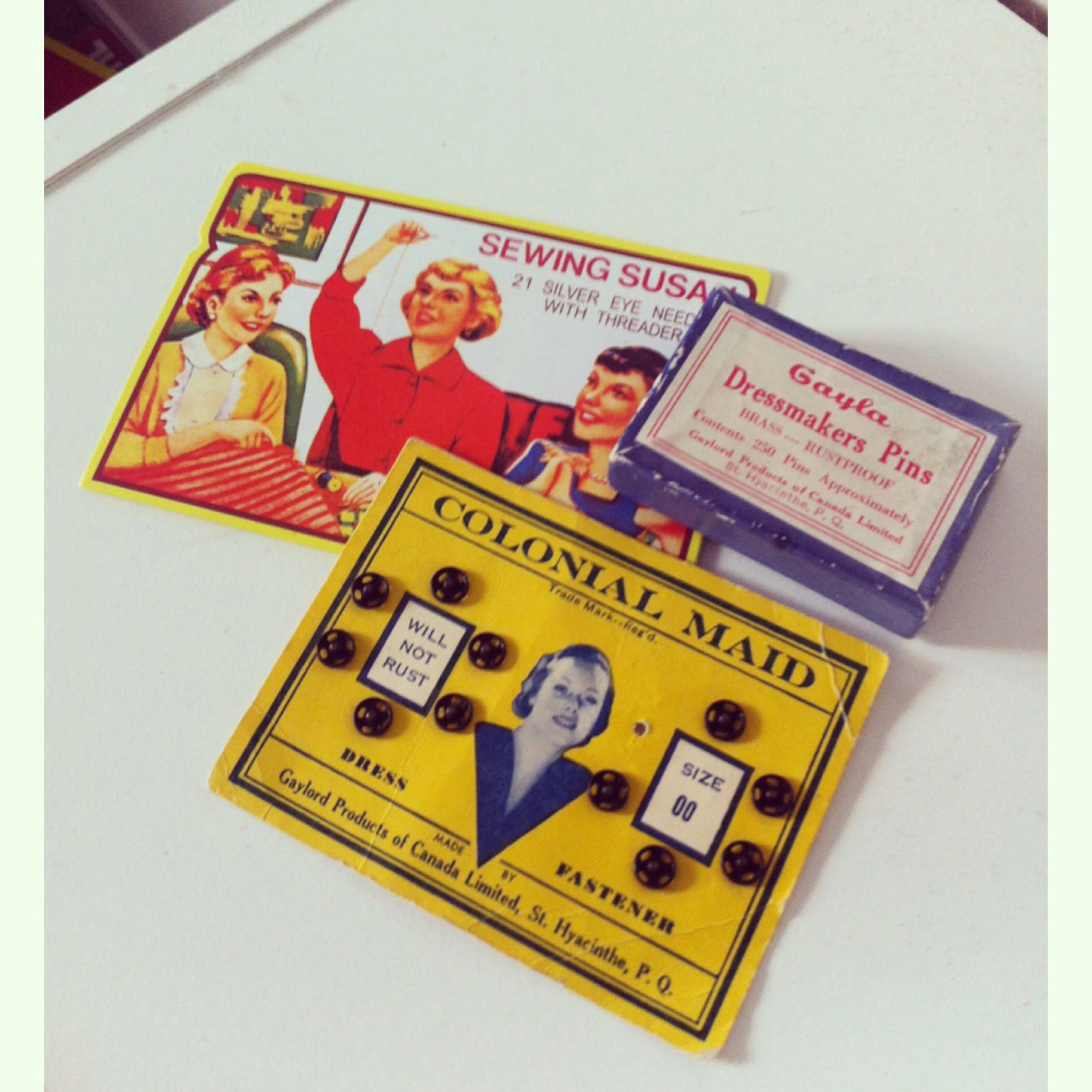 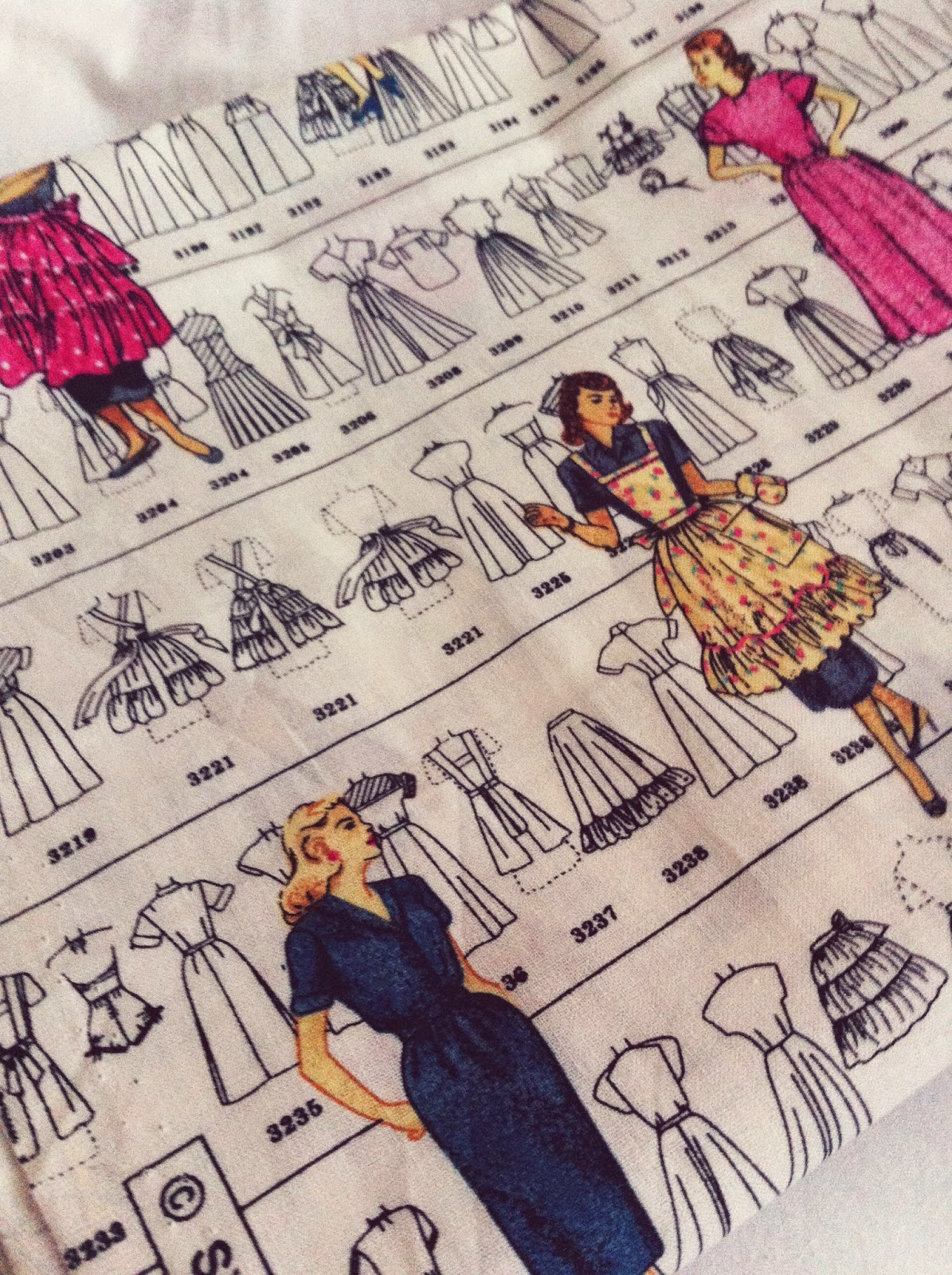 These are a few things I've collected over the past few weeks! I did also buy a few more vintage patterns, but I want to save those for a separate post.

I can't decide which is my favourite here. That radio still works and I only bought it for $30. All it needed was a couple of batteries! It's a little dodgy (sometimes it kind of stops playing until you give the volume button a budge) and its a little grainy-sounding, but I think that only adds to its character. I am so, so happy with it! And I love the colour. Funnily enough, while I was sewing last night, I had that little radio playing and I felt like I'd been transported back to the 50s right there and then. It was probably about midnight and the station began to play these old radio shows from 1949. I was working on a 1950s dress too, with the original pattern, and those old sewing notions were also sitting nearby.

I probably won't use those sewing notions - although maybe the pins, if I clean them. They're brass and they leave marks on the fabric. They're good and sharp though, so I may be able to use them. And I don't want to use the snaps for the sake of preservation; I have no idea what I would deem worthy enough to use them on anyway. Its like, that's it. Done. Finished. I feel like they'd kind of lose their value once I take them off the cardboard, so I don't really want to use them. The 'Sewing Susan' needle kit isn't actually vintage, so that is usable. I bought it in March when I was in England; there's this lovely shop in Haworth called Rose and Co. Apothecary - we always go in there every time I visit - and it sells handmade soap, cosmetics, bath salts, and cute little vintage things. If you ever find yourself in Yorkshire (though I don't know why you would) go to Haworth. It's really such a lovely little place. All the shops are down this cobbled street, and you can go and see the Bronte Sister's house near the cemetery - we always visit the house as well, as they are my favourite writers. And Top Withens up ont t' moors.

I bought that fabric today at work. One of girls there had stashed it when it first came in (so it never actually made it to the floor) and she brought it out today before we opened. There was four metres in total, and so each of us who was lucky enough to be around grabbed the opportunity to take a metre. I can't even believe how perfect it is! I might make an apron with it, and perhaps a headband with the leftovers to keep my hair back while I'm sewing, since I have very long hair.

And the heart-shaped sunglasses are also from a vintage shop, though I don't know how old they are. They are very Lana Del Ray and I am itching to wear them this Summer. I can kind of imagine myself laying in the garden wearing a polka dot bikini, reading Lolita with those glasses perched on my head. Sprinklers in the background too, and a glass of lemonade. That was literally the image that flitted through my mind when I picked those glasses up.

I'm always collecting things like this, I don't even know what decade I'm in anymore. And I'm kind of happy with it that way.
Posted by Unknown at 3:44 PM No comments:

With my 21st birthday coming up in June, I have been planning something extravagant for my party. I'm not usually one for parties at all, but this has to be special - and it all comes down to the dress. Seeing as I'm planning a 1950s themed party, I thought I may as well go all out and create my dream dress. It is just like prom all over again, only a whole lot better. So this is what I found: 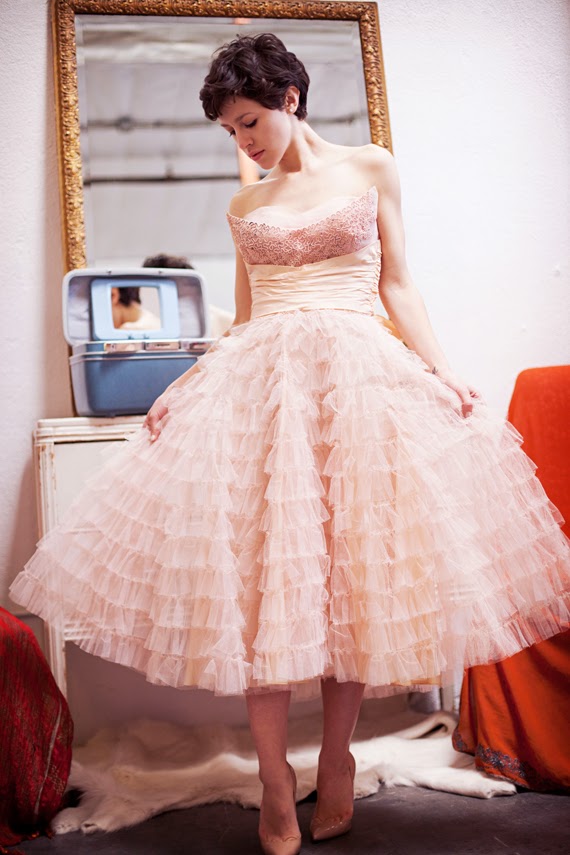 I'm definitely relinquishing my childhood dreams of flaunting around like a princess in a frilly ball gown. That was my main hesitation before I decided to start this project; I'm turning twenty-one, not ten, so I browsed around on the web a little more before I ultimately turned back to this one. Considering the girl wearing this dress looks absolutely gorgeous in it, I finally decided there's no reason I wouldn't either. Obviously it was originally designed for someone my age. It's a prom dress. So I eagerly hurried out to buy my material; I work at a fabric shop and have the perk of fabric discounts, so I purchased over ten metres of peachy-pink tulle for next to nothing.

I'm combining two patterns in order to make this dress: for the skirt, I'm using a retro Butterick 6582. The pattern has a simple circular style skirt, which is the shape I need for this dress. I cut the lining out with this pattern, and the rest is a sort of risky improvisation of guessing and cutting. I cut over twenty 6" strips of tulle for the first layer of the skirt along the hem. I've just finished the third tier and it is looking something like this so far: 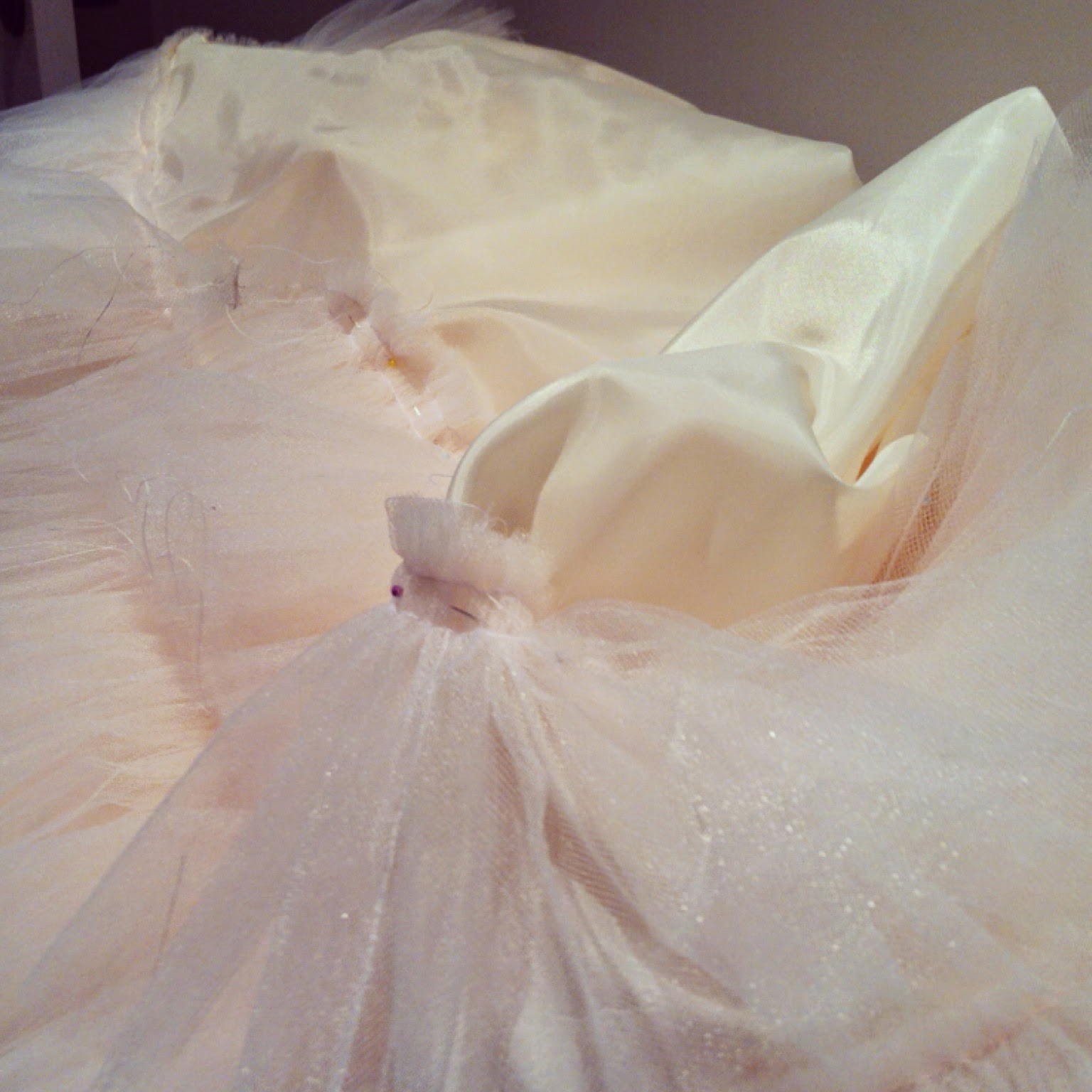 I haven't bought material for the top yet, but I'm thinking of using chiffon. My top is going to be a little different from the picture. I can't remember the pattern number I plan to use because I don't currently have it on hand, but it is a Burda pattern. The top is going to be sort of rouched, in which chiffon will work beautifully.

I will update my progress on this dress frequently!
Posted by Unknown at 11:36 AM No comments: